Posted at 01:48h in Membership Directory by awadmin 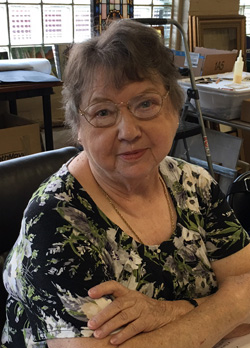 Virginia Potter is an Arkansas artist, who continues to be inspired by the natural beauty of the land and its people. She developed a rich imagination as a child, visualizing people, events, and places as she listened to stories told by her grandparents. Her early years were spent living on Pryor Mountain in Cleburne County in the years before electricity where time spent telling stories developed a child’s active imagination. The ability to visualize and imagine has served her well over a lifetime as an artist.

Virginia has lived in the Conway, Arkansas area off and on for many years as well as living in her husband’s home state of Michigan, taking advantage of educational opportunities available in each area. She studied art at the University of Central Arkansas, the Arkansas Arts Center, and Michigan’s Flint Institute of Fine Arts. She earned an Associate’s degree in Fine Arts from C.S. Mott College, where her primary field of study was in metalsmithing and jewelry as an art form, and where she also taught oil painting classes through Mott Community College’s continuing education program.

Virginia, a painter who uses oils, acrylics and watercolors, says the basic principles and elements of art remain constant, but each media has a unique character and speaks to the artist in its own way. She’s found that switching from one media to the other helps her be more creative by constantly forcing her to seek new solutions to old problems. The media she uses depends on the subject matter and the feelings she wishes to convey.

Generally considered to be a landscape artist, Virginia enjoys painting other subject matter as well. Lately her primary interest has been in painting wildlife, including many species of endangered and threatened species through Facebook’s ABUN (Artists and Biologists Unite for Nature) group. She finds painting for a purpose to be inspiring and challenging, bringing enjoyment to her while gaining attention and awareness to some of the problems facing these endangered birds, animals and habitats.