My name is Emma Hogan and my art pename is EH. I live in Conway and I work at David’s Burgers on Skyline Drive. I have always been interested in art, however, other than taking a few art classes in high school I am a self-taught artist of many art techniques, as well as acting and stage work. By the time I turned 16, I became even more interested in putting my artwork out there, especially with the encouragement of my family and friends. I put my first big art piece in the 2016 Conway, Arkansas County Fair. I got a first place ribbon and a small cash prize, I was so excited. My first art show was The 2018 Neighbors Arts Show, in which two of my pieces of artwork were accepted. I was invited again to showcase a piece of artwork at their 2019 4th Annual Art Show. Both art shows were located at The Brick Room in Downtown Conway. Art has always been a way for me to release my emotions and express myself. My hope is that my artwork will be able to touch many lives in a positive way. 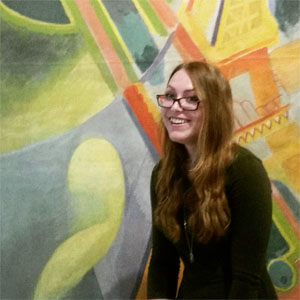 Chantal Danyluk is a portrait and figure painter based out of Little Rock, AR. She uses oil paint to create colorful, quirky, renditions of her perspective of the people she meets. She received a BA in Computer Science and Studio Art with a focus in painting from Hendrix College in 2019, where she focused primarily on painting the figure. She began her senior series exploring personality portraits in 2018 and coded a genetic algorithm exploring developing unique renditions of cellular automata in 2017. Her work continues to explore her view of the world through a lens of bright, optimistic color, while embracing the digital future. John G. Lambert joined the US Naval Reserve and served aboard the (Essex Class) aircraft carrier USS Bon Homme Richard, CVA-31, in 1965-1966 on a West-Pac for 9 months, as an Avionics Technician in VAW-11.

With keen interest in the sea, he surfed on the west coast, and later became an advanced scuba diver. Hobbies were diversified from boating to water skiing, snow skiing and photography.

He learned to fly in 1970, then purchased plans, and built his own plane, a Burt Rutan designed VariEze. He raced it, and flew it from coast-to-coast and border-to-border. A member of the EAA, he headed up a experimental aircraft builders group in San Diego for a number of years, and became both active with (and historian of) an experimental aircraft racing group.

With his background in the navy, and aviation, he wrote a book on the history of the WWII aircraft carrier USS Independence, CVL-22, at the request of the ship’s Reunion Group.

The book has involved approx. 9 years of research, with trips across the nation to places including NARA – The National Archives in College Park MD, and NARA San Bruno CA, the Naval Air Museum in Pensacola, Tailhook Association in San Diego, to name a few. First released in 2011, with file changes made since for inclusion of additional historical data and photos.

John was invited to join Dr. James Delgado on the joint NOAA / Navy / Boeing / Coda Octopus mission to obtain 3D side scan sonar images of the USS Independence on the bottom of the Pacific off Half Moon Bay California in 2015. The image provided by NOAA now on the book back cover.

The following year John was invited to participate as a “Scientist Ashore” on Bob Ballard’s mission with his vessel “Nautilus” to live stream video and photograph the ex USS Independence on the bottom for four days.

John began painting (acrylic) in 2018. “It gives me something to do and most of my paintings strongly connect me with my past, bringing an upwelling on memories as I stroke and dab at the canvas”. There are no upcoming events.

Got questions? Send us an email!